Review: If I Were You by Lisa Renee Jones 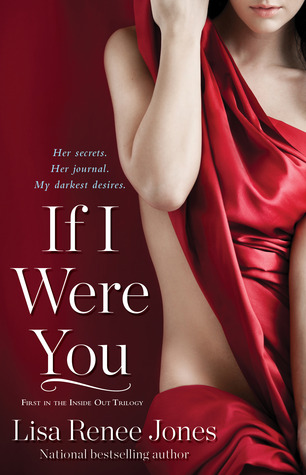 First of all, I found that I'm not the biggest fan of Jones' writing. I feel like if her writing was more polished this story would really pop off the pages. It gave me the feeling of any other mass market paperback romance writer. Also, in some places I thought the story got way off track. I initially started reading the book to find out about Rebecca and what happened to her but beyond the first third of the book it goes from really focusing on Rebecca to Sara obsessing over her new sexual relationship. I was really longing for more journal entries and was left empty.

Despite all that I found that was wrong with the book, I honestly really enjoyed it. It ends with a crazy cliffhanger and I found myself absolutely desperate to get my hands on the next one. What I really liked is that all of the characters are complete mysteries. Even Sara, who you think you have all figured out isn't what you think she is. The need to know these characters and their secrets is what propelled me to devour this story and long for more.

All in all, I gave this book 3 out of 5 stars. I would recommend it to anyone who likes New Adult or Adult romance novels. It's definitely for fans of 50 Shades of Grey.

I just want to start out this review by saying Holy pleasant surprise, Batman! As soon as I started reading Ten Tiny Breaths I thought I was going to hate it. The main character, Kacey, annoyed me with her "bad girl" attitude and I honestly didn't think she would ever redeem herself. Boy, was I wrong. Synopsis: Ten Tiny Breaths follows twenty year-old Kacey, a troubled bad girl with a dark past. When she was younger she survived a car accident that killed her parents, her best friend and her boyfriend. Being left with only her little sister Livie, Kacey is forced to move in with her holy-roller Aunt Darla. When Darla's husband is inappropriate towards fifteen year-old Livie, Kacey takes her younger sister and runs to Miami. In Miami the girls find a cheap apartment, a job for Kacey and a hot neighbor named Trent Emerson with a troubled past of his own.

Some of the things I really loved about this book were the characters. They were all so well rounded and felt like people I could run into in real life. I love the way Tucker described Kacey's neighbor stormed and how she opened her up to be such a beautiful person. At first Kacey's attitude really annoys me but she experiences such major character development that I couldn't not like her at the end. In terms of characters, I only had one problem. Trent. I felt like Trent was a carbon copy of every other male love interest in every other New Adult genre novel. He just didn't strike me as anything special.

One thing that really confused me about this book was the pacing. I felt like I got 70% of the way through the book before the twist happened...and then there were still twists that occurred within the last 10 pages of the book. The first 70% was a whole bunch of character development and building and then BAM, twist. twist. twist. It was like a series of car accidents and it came off as rushed.

Despite what I said as far as dislikes, I really did like this book. I'm not generally a huge fan of the New Adult genre (I find them all to be bland and almost exactly the same), but this one I really liked. I loved that it wasn't overly packed with sex scenes and that it honestly dealt with some hard hitting issues. I would recommend this to anyone who is a fan of the Young Adult genre or New Adult. Ten Tiny Breaths was a great break between a slew of heavy fiction novels and I'm glad I decided to stick with it after my initial distaste. I will definitely be continuing on with this series!

Hi everyone! I decided to make a new book blog and I wanted to take the time to introduce you to it! Here I will not only be posting book reviews and suggestions, I will also be posting my To-be-read list for the month and a monthly wrap up. I can't wait to show you what I have in store so stay tuned! :)